UPDATE (2 JAN 2013): The South didn’t go through with the lighting of the tree last year, in 2011, but went ahead and approved it this holiday season, per the AP. The North was less than happy about the “open challenge and an unpardonable provocation” from the South, but has so far refrained from all but a verbal response. 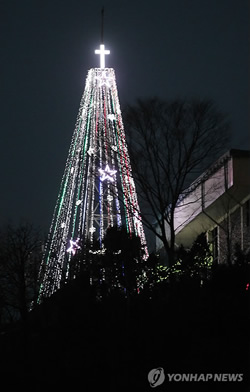 Calling the large metal structure decorated with lights and designed to look like a Christmas tree, a “tool of psychological warfare,” the North Korea affiliated website 우리 민족끼리 (roughly, ‘Our People’s Path’) threatened the South with “unexpected consequences” should the lights be turned on.

The metal structure in question, shown here courtesy Yonhap News and NKchosun.com, is roughly shaped like a Christmas tree and expected to be located on the South’s side of the de-militarized zone (DMZ), north of the city of Kimpo in Gyeonggi Province.

A Christian organization requested permission to set up at least one of the trees and decorate it with lights that would be visible from the North, as shown here.

The North, per the reaction quoted above, is not happy. Technically, as the North points out, the tree and lights may be a violation of a 2004 agreement between the two countries that prohibits “propaganda” in the DMZ.

The North’s strenuous objections under the agreement appear to highlight Pyongyang’s sensitivity to outside, uncontrolled messages reaching its populace.