UPDATE (10 April): The South made its preliminary case today that a North Korean espionage agency was behind the 20 March cyber attacks. According to the South’s report, the North began preparing for the attack last June, with systems testing beginning in late February. Of the 76 types of malicious code used in the attack, 30 were similar to previous attacks by the North, and 22 of 49 IP addresses overlapped with previous addresses used during cyber attacks traced to the North since 2009. 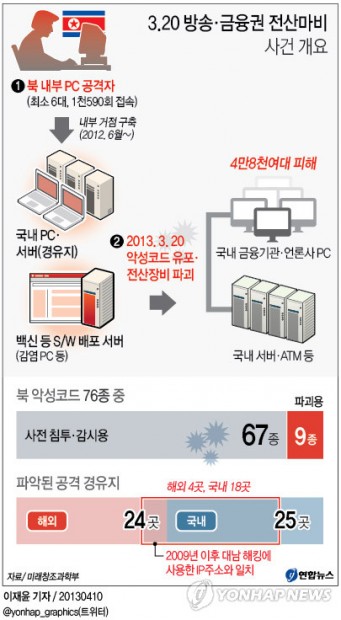 UPDATE (22 March): The South’s communications commission issued an update today declaring the cyber attack started from an IP address at a domestic bank (Nonghyup), not a Chinese address, as they reported yesterday. Meaning, aside from an irritated China and embarrassed Korean bureaucrats, that the attack erupted from a domestic source. How the code was placed on that server, by whom, and how it spread is still under investigation – an investigation likely to be much more circumspect in placing blame during future announcements.

North-South tensions on the Korean peninsula – indicators for the future

UPDATE (3 April): The North closed entry to Kaesong today for South Koreans, but allowed those present in the complex to either remain in the North or head home to the South. Citing business and production concerns, only 33 of 446 South Korean workers in the complex actually came South, with the rest remaining behind to tend to their work or business interests. Posing the somewhat interesting question – given a choice, would you elect to stay in North Korea right now for your employer or business?

Previous closures have been short-lived, with few repercussions for those remaining behind, those who left, or the businesses located in the zone. Time will tell if this closure ends the same. Either way however, today’s closure signals a further heightening of tensions and worsening of inter-Korean relations.

UPDATE (1 April): The North actually threatened to close the Kaesong complex over the weekend, but most doubt they will follow through on the threat. If the North’s leadership is under the illusion that shutting the facility will hurt the South worse than the North they might be tempted, but short of that level of cluelessness, the North is unlikely to close such a prime hard currency source.

UPDATE (28 March): Reuters catching on to the idea of Kaesong as an indicator of the true level of tension on the Korean peninsula: Despite threats, North Korea keeps border factories open.

Every time tensions rise on the Korean peninsula, people start asking what’s going to happen next. Is there going to be a war? Will tensions cool? Will the North conduct an additional rocket or nuke test? Will there be another cyberattack or similar provocation? While no one outside of the North’s inner circle (now including Dennis Rodman?) can say for sure, there are a few indicators.

It appears the North is doing exactly what it said it was going to do – become a nuclear state, then, like every other nuclear state before it, develop a weapon small enough to fit atop a missile. This should be no surprise, the North’s takeaway from the war in Iraq was that it needed nukes to ensure its security; it literally mocked Qaddafi for being tricked into giving up his pursuit of nukes:

“The present Libyan crisis teaches the international community a serious lesson. It was fully exposed before the world that ‘Libya’s nuclear dismantlement’ much touted by the U.S. in the past turned out to be a mode of aggression whereby the latter coaxed the former […] to disarm itself and then swallowed it up by force. It proved once again the truth of history that peace can be preserved only when one builds up one’s own strength.” [KCNA website, 24 March 2011].

The idea that additional UN sanctions, much discussed in today’s reporting, will push North Korea from this path is delusory. This is a country that is already one of the most sanctioned on earth and operates under an ideology of self-reliance so stringent it views international trade as a weakness. Expecting anything different from additional sanctions brings to mind the old saw about doing the same thing over and over again and expecting a different result.

[Book Review] I’m glad someone finally went to the trouble of researching and writing a book on the network, for obvious reasons quite secretive, which works to get North Korean defectors through China and into safety in South Korea or elsewhere.

You might ask why North Korean refugees aren’t safe once they reach China, given that China is obliged to protect the refugees by virtue of agreeing to international treaties including the 1951 Convention Relating to the Status of Refugees and the International Covenant on Civil and Political Rights (which includes The Universal Declaration of Human Rights). Unfortunately, at least in this case, China’s government pays about as much heed to international treaties as America’s Tea Party. Instead of upholding its treaty obligations, it actively tracks, arrests, and returns the refugees to the North, where they and their families face sentencing to one of the North’s infamous gulags. Those caught helping North Korean refugees in China face, at best, expulsion from the country, at worst, years in a Chinese prison.

Given these conditions, Kirkpatrick’s choice of subtitles, “The untold story of Asia’s underground railroad,” becomes more apt. Though the book’s comparisons to the slave-era American underground railroad are occasionally jarring, suddenly transporting the reader from modern Asia to 1800s America, they serve to highlight the similar dangers faced by everyone involved.

While many think first of propaganda paintings when it comes to North Korea, the North also has a great deal of traditional paintings of the ‘misty mountain landscape’ variety so prevalent in East Asian painting. Below are a few, courtesy of Mansudae Art Studio. To learn more about Mansudae, try this story about an Italian importer of their art.

I’ll post a few of them below, but head to my Facebook page to view the complete album. 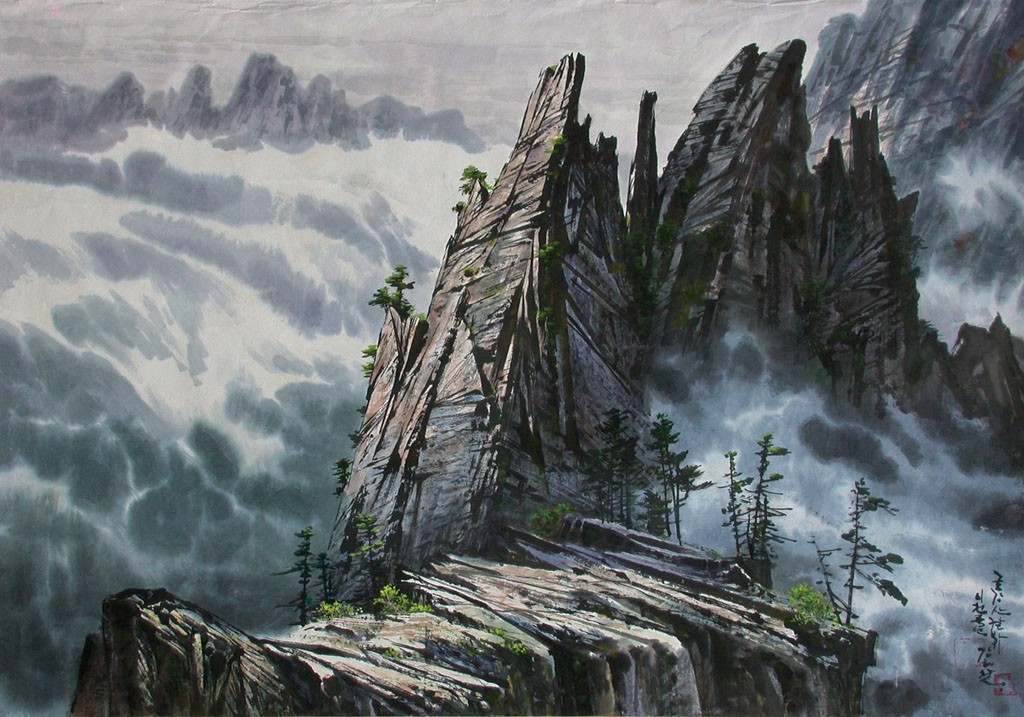 Using the ‘Internet’ inside North Korea

The BBC has an interesting article today on surfing the ‘Internet’ inside North Korea – which means, per previous description here, surfing a circumscribed, domestic-content-only version of the Net. Fun fact #1 from the article: “There’s a curious quirk on every official North Korean website. A piece of programming that must be included in each page’s code. […] Whenever leader Kim Jong-un is mentioned, his name is automatically displayed ever so slightly bigger than the text around it.” Fun fact #2: “The computer’s calendar does not read 2012, but 101 – the number of years since the birth of Kim Il-sung.” Read the rest of the story at the BBC.

UPDATE (8 Feb.) – Earlier this week, South Korea announced a possible increase in inspections of goods headed into Kaesong based on tightened UN sanctions of North Korea (due to the December rocket test). North Korea, in it’s typical calm, understated fashion, threatened to return the entire industrial complex to a military zone due to the provocations from the South’s “puppet Ministry” in charge of the inspections. By Friday, South Korea had backed down, announcing that the “government does not consider the Gaeseong Industrial Complex as a means of sanctions against North Korea.” The North’s reaction and the South’s move to calm the issue, all in less than a week, show both the importance and sensitivity to Kaesong in both countries.

In a previous column on heightened tensions between North and South Korea over the sinking of the Cheonan, a South Korean naval ship, and the North’s shelling of the South’s Yeonpyeong Island, I highlighted Kaesong as a key indicator. If the joint North-South industrial complex at Kaesong remained open, tensions were not that serious and would soon ease. If the South withdrew its people from the complex however, that would indicate relations were about to get much worse, including a possible retaliatory strike by the South on the North.

As we now know, conditions in the complex remained largely the same and tensions on the peninsula soon cooled.

With the upcoming rocket launch by the North, Kaesong remains a good indicator of actual relations between the two countries. Post-launch, if operations in the complex remain normal, then relations will soon return to an even keel. However, any withdrawal by the South, or expulsion by the North, indicate a much greater risk of instability and/or provocative actions.

Ever thought of working overseas? Read on

Bored? Need a job? A better job? A more interesting job? Tired of your cubicle, your daily rut, your relaxed and easy life? How about working overseas? The Washington Post had a great article on working abroad a couple of weeks ago and I wanted to highlight it here. First, according to the article, the number of Americans (and plenty of folks from other countries) working overseas has hit an all-time high, now standing at 6.3 million. A whole bunch more people are soon to be included in those figures – the percentage of Americans ages 25 to 34 who are planning to move overseas has quintupled in two years, from less than 1 percent to 5.1 percent. Among 18- to 24-year-olds, 40 percent are interested in moving abroad, up from 12 percent in 2007.