NK: Forest Fires Are a ‘Gift from Heaven’

There have been reports over the past couple of weeks of forest fires in North Korea, including one fire that came across the border and into the South’s side of the DMZ. NASA has even detected the fires, mainly along the North’s east coast. 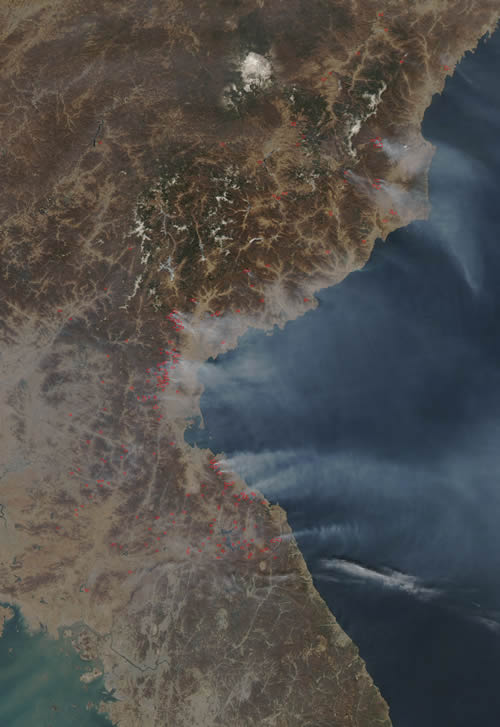 While forest fires might be expected to be bad news, especially in a country as hungry and agriculturally-deprived as North Korea, defector reporting from today’s Chosun Ilbo says exactly the opposite. According to the report, the fires are “heaven-sent gifts” that foster the growth of 고사리, a type of fern or bracken eaten by starving North Koreans. The fires also clear areas for future cultivation and reportedly create additional firewood [not exactly sure how that works, but I rarely wander burned-out forests in search of bracken and places to grow my crops]. The desperation runs so strong that people attempting to put out the fires are criticized or blocked. The government and party mainly focus fire prevention efforts on saving trees with writings praising Kim Il-sung, a concern reportedly ignored by most people. Not that putting out the fires is really an option – most firefighting equipment is reportedly so old and in such disrepair that it doesn’t work. So, forest fires are good, prevention efforts should focus on special Kim Il-sung trees rather than homes or people, and it doesn’t really matter anyway, because none of the firefighting equipment works. North Korea, helping keep the news weird since 1948 …

After years of living in Korea, it was odd to open the Post this morning in DC and find an article on authorities busting a local Korean room salon. Two people, the owner and the “primary ‘madam'”, were sentenced to jail for reportedly employing dozens of illegal immigrant women as … ahem, “hostesses.” This was the kind of stuff that kept Koreans from getting visa-free status to visit the U.S. until long after their economic development and income levels merited it. Read all about it in the brief Post article.

A recent survey of 370 North Koreans reported by Radio Free Asia (and picked up by MBC News in South Korea) found that 90% of those surveyed had given gifts (of money, food, cigarettes, or alcohol) to a doctor in exchange for treatment. Though medical care in the North is supposed to be free, the country can no longer afford to provide enough medicine and pay salaries, leaving many doctors and nurses to demand bribes/gifts/payments in exchange for treatment. The cost to patients can be quite severe, worth 140% of a month’s income for farmers, 80% of a month’s income for office workers, and 60% for factory workers. A heavy burden given that the average monthly income for a worker in their 40s is $45, which leaves little to spare for emergencies. A side effect of the high costs has been tuberculosis (TB) patients not completing their full cycle of medication, instead selling some of their medicine on the black market once the disease appears to have passed. With TB medicine one of the most common items donated to the North by groups from the World Health Organization to the Eugene Bell Foundation, patients sometimes receive this medicine for free or at very low cost. Unfortunately, they often sell some on the black market rather than take the full course of treatment – giving a boost to much harder to treat drug-resistant forms of the disease. Drug-resistant TB is much more dangerous than earlier forms of the disease and, unfortunately, spells even worse trouble looming in North Korea’s already bleak future.

Bored? Tired of the Internet? Try Teaching English in Pyongyang

According to a recent story from Radio Free Asia, English teachers, even American nationals, are needed in North Korea. Organizations including the Mennonite Central Committee (in the U.S. and Canada), the New Zealand-based NZ-DPRK Society, the British Council, Canada’s Trinity Western University, and Global Resource Services in the United States have all sent, or plan to send, English teachers to North Korea. Some positions are paid, others are voluntary. Anyone wishing to head North may first want to read this account of a British editor and sometime English teacher’s year in Pyongyang. Though a bit dated (he was there from 1987-88) it is still a great read. And, at free, you can’t beat the price. Keep in mind that if you go, 1.) you’ll forever win the pretentiousness game when it comes to North Korea (“Interesting opinion professor, but when I was living in the North, I actually learned that …”). 2.) You won’t be seeing much of the Internet (which many may consider a blessing). 3.) You should be able to get a book, or at least a decent series of blog postings, from the deal.

North Korea announced on 7 April that it had discovered traces of radioactive materials from Japan’s Fukushima Daiichi nuclear plant, though at levels below that deemed dangerous. In response, the North’s state-run TV also reportedly ran a special on how to prevent radioactive contamination and flush it from your body, including advising people to wear raincoats in the rain, use face masks, and have, “seaweed, water and beer […] to prevent radioactive materials staying in the body.” If nothing else, the beer should at least make you feel better.

The “cyber cops” at South Korea’s National Police Cyber Terror Response Center announced today that North Korea was responsible for an early March cyber attack on South Korean websites (related posting here). The latest attack reportedly used the same techniques and IP addresses as a 7 July 2009 attack also blamed on the North. The latest attack reportedly harnessed 746 servers in 70 countries in a distributed denial-of-service (DDoS) attack on 40 South Korean websites. With two attacks, both somewhat successful, and no repercussions, look for the North to continue this method of provocation, especially if Kim Jong-eun really is in charge of the unit conducting the attacks. Given the current (lack of) food situation in the North, an April or May provocation to help unite North Korea’s domestic populace during the depths of the food crisis is increasingly likely (ala last year’s attack on the Cheonan and shelling of Yeonpyeong Island / 연평도).

Interesting follow-up to a previous report on North Korea attempting to jam GPS signals in Seoul and other areas of the South back in early March. SK Telecom, one of the South’s leading telecom providers, announced today that it had developed a new technique to protect 2G and later phones from future jamming attempts. The company plans to update its systems and fully implement the added protections by mid-April, helping safeguard its customers and their phones not only from future GPS jamming attempts, but also attempts by the North to block or reduce call quality.

In a surprising twist, SK also said it would make the knowledge available for free to other telecoms, apparently viewing the jamming as a national security issue rather than a chance to make a quick buck. Kudos to SK for that.

South Korea uses the CDMA system, like Verizon in the U.S., but not GSM (like AT&T). So the new technique is likely readily replicable by Verizon, should it so decide (in case Canada attacks?), but may be more complicated for AT&T (or anyone trying to use a GSM phone in South Korea).

The Chairman of North Korea’s Supreme People’s Assembly was recently in Britain begging for food, part of a recent campaign by the North to acquire food supplies for: Combine these doubts with Kim Jong-il’s recent offer to donate $500,000 to Japanese relief efforts, made at the same time the UN was reporting the North needed aid to feed six million people, and you can see why the North is having difficulty attracting much international support. Caught in the middle? The six million hungry people.

In a notice sent out to applicants on Sunday, USAID (the U.S. Agency for International Development) notified applicants that a recent job listing for a permanent, worldwide position is, in fact, neither  permanent nor worldwide. Instead, and thank you very much for applying, the position is limited to a maximum term of five years and is located … wait for it … only in Afghanistan. Ooops.