The Sex Lives of Cannibals: Adrift in the Equatorial Pacific

[hang1column element=”div” width=”122″][/hang1column] [Book Review] Fun, and shows the difference between an expat writer and a travel writer – one showing the dirty, mundane, often boring reality of a place, the other superficially highlighting its “entrancing nature” and “delightfully colorful locals” – whatever that means. Troost’s book gets past the fairytale images of living on pretty islands to provide plenty of detail, sewage problems and all, of life in the Pacific. A quick, interesting read, though, FYI, there’s not much sex – you can probably blame the title on the publisher.

For anyone who speaks Korean (or wants to learn how the North Koreans write things), then try the defector-run website GoodFriends Korea.
Operated by North Korean defectors in South Korea, the information on the site is used by journalists, intel agencies, aid groups, academics, and others interested in the North. Much of the information is based on defector testimony and reports sent to the organization by North Koreans who have smuggled cell phones back into their country. While little of the info is verifiable by outsiders, GoodFriends provides a quantity and range of info on the North available nowhere else.

For Americans of a certain age these four words are inextricably linked. The Iran hostage crisis forever burned Iran and Khomeini into our minds as emblems of danger and evil. Nearly 30 years have passed since then but stories of nukes, kooky mullahs, and oppressed women have done little to improve Iran’s image.

In December 2005 I walked into an Iranian embassy, saw a picture of Khomeini frowning down, and all of those early memories came flooding back. As the trip approached my foreboding increased – by the day of the flight I was much more worked up about Iran than I had ever been with North Korea or Iraq.

It didn’t help that I’d decided to fly Iran Air. At first it seemed like an interesting airline to try, plus it offered a convenient connection from where I was staying in Seoul. The problem was that the flight would be on an old Boeing bought before Iran’s Islamic revolution in 1979. U.S. economic sanctions have since prevented Iran Air from doing much upkeep and modernization – meaning the most dangerous part of the trip could well be the flight in.

Morning brought a better look at the hotel. My room was tiny and the bathroom miniscule. I practically had to stand with one foot in the toilet to take a shower. But at least there was a shower, hot water, and a couple of international channels on the TV. As I got dressed I caught a BBC News report on Iran suddenly banning the sale of Western movies and music CDs.

A couple of hours later I met up with Professor. Day One was set aside mainly for us to get acquainted, and for me to get a taste of Tehran, before leaving on our tour around the country early the next morning. I’d bought a 20-day trip, the longest the agency offered, in the hopes of seeing as much of the country as possible. We would first head west toward Iraq, then south toward the Persian Gulf, east toward Afghanistan, then back to the center and Tehran. Basically, we’d be taking a long counter-clockwise look at most of the country.

Three weeks from today we’d be back in Tehran and Professor would be dropping me off at the train station. The only time Americans are not required to have a guide in Iran is on the train, in or out. So I’d booked the longest train ride I could find – a four-day trip that’d take me from Tehran through northwestern Iran, across the mountainous border into the Kurdish areas of eastern Turkey, then all the way across Turkey to Istanbul.

After going over the tour and schedule we, thankfully, set out on foot for some of the downtown sites. There’s nothing like walking through a new city speaking English to gauge how people instinctively react to foreigners – incredulity and shock, hard stares and irritation, or pleasant surprise and looks of welcome. I was happy, and somewhat surprised, to see Iranians fall into the last category.

Road South along the Iraqi Border

(DAY 5) Almost a year to the day after I left Baghdad, today’s drive would take us within sight of the Iran-Iraq border. Traveling south along the low mountain chain that divides the two countries felt almost surreal. Here I was relaxing in a car, sipping tea with my guide while on the other side of those mountains a war raged.

Professor saw me staring at the mountains. I’d already told him about my ‘Axis of Evil tour’ and that I’d worked for the U.S. government in Iraq. Hell, I was sitting in his car wearing the desert boots Uncle Sam issued me.

Professor, and every other Iranian I mentioned it to, didn’t like the Axis of Evil thing; my tour or the original comment. “Comparing us to the North Koreans is just rude, man. We’ve got the Internet. We can talk about politics. We’re not a bunch of crazy assholes.”

He asked me about my time in Iraq. If I’d ever been shot at or anything. I told him about getting rocketed and mortared, plus the window-rattling car bomb blasts. He told me about the Iran-Iraq war when he’d guided a few Western journalists through some of these same areas for a tour of the frontlines. About artillery blasts, air attacks, and poison gas worries. About yelling at one of the TV journalists for hyping the dangers to make his report sound more exciting, “He was just standing there and lying, man. It pissed me off.”

(DAY 12) Newspapers, websites, TV news – it seemed that every one of them had run a feature on Iran’s rejuvenated nuclear program in the days leading up to this part of my trip. In nearly every story Esfahan was listed as the major city closest to the program’s home. There were so many stories it actually felt like driving into a spotlight, like being back in Baghdad, knowing you were at the center of world attention.

Esfahan was the first large city we’d been in since Tehran. After all of the emptiness and countryside it felt cramped and confusing. I could tell it bothered Professor too – he was more at home in the country or around the tourist sites than driving in big city traffic.

Searching for our downtown hotel took forever in Esfahan’s confusing maze of one-way streets and wall-to-wall cars. We had to stop and ask for directions a half dozen times, though by now I could roll down the window and ask for directions myself. Seeing the surprised looks on people’s faces when a foreigner asked for directions, let alone in Farsi, got Professor and I laughing and helped break the tediousness of the search.

Home of the Mullahs – Qom

(Day 16) I’d been told by one Iranian that, “an American in Qom is like an Al Qaeda in the White House.” So I was a little nervous about this stop, and I could tell Professor was too. Qom (rhymes with ‘gnome’) is home to one of Iran’s (and Shia Islam’s) holiest sites. The city itself is a stronghold of the current conservative government and served as Khomeini’s base for the revolution in 1979. No liberals or opposition groups here; this is the center of mullah control over the government, culture, and politics of Iran. From this city spreads Iranian religious and political influence into Iraq, Lebanon and Hezbollah, Palestine and Hamas, and a host of other organizations and countries around the world. While most international attention focuses on the nuclear program down in Natanz, or the politicians in Tehran, it’s the clerics living in Qom that actually control the fate of Iran.

From guidebooks, media, and talks with people along the way I rolled into Qom with a sense of dread. The nervousness reminded me of how I felt boarding the plane into Iran a couple of weeks previous. Then the sense of the ominous was quickly displaced by the man on the plane doing his giant book of puzzles and mazes. Pulling into Qom, all darkness and seriousness, the spell was broken when the first thing I see from the exit is a giant Ferris wheel sticking out over a gaily-painted amusement park. I actually laughed out loud, getting a weird look from a still-nervous Professor, at the incongruity of my preconceptions and the happy little carnival.

After a fantastic three weeks traveling around Iran, it was finally time to turn towards home. As an American, the only way to obtain an Iranian visa had been to book a guided tour, and while the guide had been sage-like in his knowledge and helpfulness, I was looking forward to a little time on my own. Since the visa rules require a guide only inside the country, but not on the way in or out, I’d booked the longest outbound trip I could find, the Tehran-Istanbul train.

Everything started out fine. Professor [my guide] and his taxi-driving brother-in-law met me at the hotel for our short drive to Tehran’s train station. Standing inside the station, I was sad to say goodbye – Professor had become a friend during our intense three weeks together and I was going to miss him. After making sure my seat assignment and baggage were in order, and still somewhat surprised I was leaving by train instead of plane, he held out his hand and we said goodbye. Then, quickly and without another word, he disappeared out the station doors and I was suddenly alone.

The train was barely half full, with only one other person in my 4-bunk compartment. My roommate for the four-day journey was to be a young Afghani who spoke no Persian and whose only English was ‘ok’. Since that was more Afghani than I speak, we went with his English and a lot of miming. He was going to Istanbul to work and seemed spellbound by my maps of Iran and Turkey. Other than that he turned out to be a very quiet guy – perfect for a long train ride. 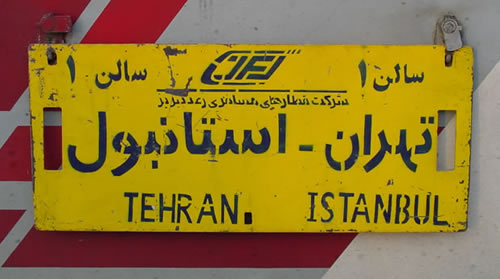 My train from Tehran to Istanbul

Under the Loving Care of the Fatherly Leader: North Korea and the Kim Dynasty

[hang1column element=”div” width=”122″][/hang1column] [Book Review] At over 700 pages, plus nearly 150 pages of notes, this is one of the most detailed English-language books on North Korea I have ever read. The author’s journalism background makes for a more enjoyable, less-academic read than many other North Korea books reviewed here, plus the controversial use of defector testimony/interviews brings the subject to life. Strange name aside, an excellent, thoroughly readable look at North Korea. [Traditionally, defector testimony has been thought unreliable due to the suspected influence of South Korean intelligence on refugees during their initial debriefing period in the South. However, the much larger numbers of defectors (both in China and the South) since the North Korean famine in the 90s, many telling similar stories, have led to a reevaluation of this preconception by most mainstream scholars. The left, especially in South Korea, still tends to deny the trustworthiness of defector accounts however, so there is still some controversy regarding defector-based scholarship.]