UPDATE (13 MAY 2015): My thoughts are with the victims and families of last night’s Northeast Regional 188 that derailed in Philadelphia.

Having ridden the DC-NYC portion of Amtrak’s Northeast Regional twice a month for the past three years, I feel I should write something about it, but do so more out of a sense of obligation than any deep feelings for Amtrak at its most utilitarian. To quote Theroux’s The Old Patagonian Express, “No good train ever goes far enough, just as no bad train ever reaches its destination soon enough.” The Northeast Regional lies squarely in the mildly pleasant middle. 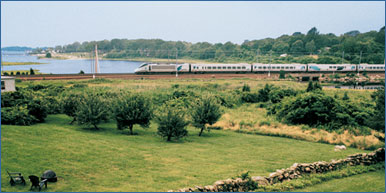 First off, compared to most other routes, the Northeast Regional is expensive – which is probably why it’s the only Amtrak line that pays for itself. It can also get crowded, forcing people to roam from car to car in search of a seat or, as I did one Thanksgiving-eve, sit on the floor between cars, surrounded by fumes (the tunnel into Baltimore was especially pungent) and the occasional snowflake.


Traveling in the depths of summer can be a separate challenge, especially the southernmost portions of the route, because Amtrak, as well as the freight lines it shares the tracks with, orders trains to slow down when temps rise above 90. This plays havoc with the schedule and frequently leaves you standing in a line of footsore, irritable passengers at Union Station or, worse, at an outside-only station in the broiling sun. The reason for these “go slow” orders is that heat can cause a “sun kink” that misaligns tracks and could, in a worst case, cause a derailment.

Whatever the weather, there are normally three types of cars on the Northeast Regional: coach, quiet, and business. Business costs extra and will get you a little more space; coach and quiet are the same price. The only difference between the latter two is that no cellphone/laptop noises, loud conversations, etc. are allowed in the quiet car. And they (both conductors and regulars – who search out the quiet car) take this very seriously. Several times, I’ve seen conductors bounce people from the car for being loud, or having loud children. If you need to make a call, or yell when you talk (e.g. you’re from Jersey or NYC), then sitting in a normal coach car is a better choice – just ask NJ governor Chris Christie, bounced from a quiet car by a conductor in October 2015. 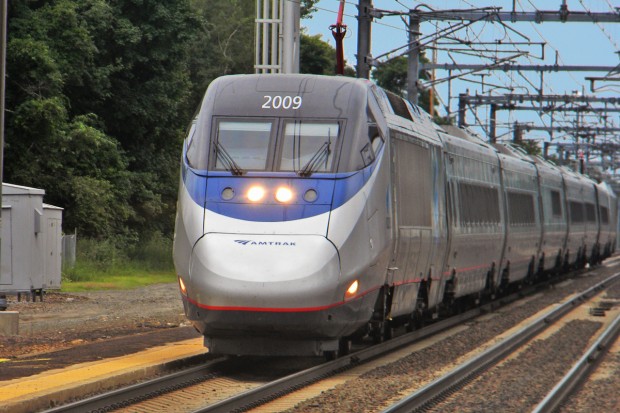 The Acela, Amtrak’s least-slow train, plies the same route as the Northeast Regional and can save you a little time, though at greater cost. I’ve rarely found the Acela worth the price, but the difference between it and the normal train does occasionally narrow enough for it to make sense, especially since Acela tickets can (depending on the length of the trip) generate more reward miles. By saving a little time, offering decent rewards, and with roomy business class as the Acela’s base class, the line has a fair number of supporters – don’t expect more empty seats just because it costs more.

Like many Amtrak trains, both the Acela and the regular Northeast Regional claim to offer wi-fi, allowing you to surf the net while you cruise the rails. The service is so slow and irritating I normally turn off my phone’s wi-fi during boarding. Per a recent article in the Times, I’m not the only one having problems connecting with Amtrak.

Stations
Before and after the trains, you get to deal with the stations. In DC, Union Station (the front anyway) is beautiful, though large parts are still covered in scaffolding due to last year’s earthquake and resulting repairs. Be sure and look up when cutting through the central hall.

The downside of Union Station is the lines. It’s a busy station, serving not only Amtrak, but also DC’s Metro system, bus lines, and local rail from both Maryland and Virginia. Worse, the station seems utterly clueless as to how to deal with the lines, which regularly stretch halfway down the concourse. If I had a buck for every time some incredulous new passenger asked me if this really is the line for the train to New York, I’d pay for the station refurbishments myself.

Why Amtrak doesn’t allow people to wait alongside the rails at Union Station, like Metro does not 50 yards away, or Amtrak itself does at nearly every other station, is beyond me. It’d solve the problems with overcrowding in a single stroke, and do it for far less than their laughably audacious plan to spend seven billion dollars (yes, “billion”) on a station overhaul. Though, if they insist on the seven billion dollar plan, they’ll hopefully update the men’s room, again, only this time leaving out the worst hand dryers on the planet.

Boarding in DC, once you pass the ticket agent, becomes a mad dash down the platform as people scramble for seats (there’s no assigned seating). Though, unless it’s a holiday, you should have no trouble finding a spot, so don’t stress if you’re near the back of the line. On a side note, if you sit in the last car, especially on Friday evenings, you’ll usually find several Amtrak workers onboard. Overhearing (or joining in) their conversations, many of them quite loud, affords greater insight into Amtrak operations than anything I’ve yet come across.

Once rolling north (be sure and wave to the poor saps stuck in traffic on 95), the DC suburbs (New Carrollton) are first up, then BWI airport, before pulling into an area of Baltimore that could charitably be described as offering good deals on fixer-uppers. After Baltimore comes the longest stretch without a stop, save for the occasional train that pauses briefly in Aberdeen, MD, before hitting Wilmington, DE and then Philadelphia. Wilmington’s redeveloped areas, including the station, are some of the nicest of the trip – note to Baltimore. A key with Philly is this is where a lot of people get off, so if you need to change seats, or angle for a row all to yourself, do it here. Shortly after Philly comes Trenton, then, occasionally, Princeton, before hitting northern Jersey’s Metropark and Newark, and then on into NYC.

If you decide to get off in Newark, instead of going all the way into the city (as many do), prepare yourself for one of the visual, auditory, and olfactory treats of the age. I’ve spent time in SE DC (before the ballpark), Detroit, plus warzones and a fair chunk of the third world, and Newark’s train station easily joins those illustrious locations as one of the lousiest spots on the planet. Aside from a bomb scare in Manila, I’ve never seen as many police warily walking around as in Newark. I’ve also never smelled or seen a place that’s, essentially, a giant piss anywhere zone. Perhaps the openness to free-flowing public urination came out of necessity, since the bathrooms are typically filled with angry bums and loud drugs-for-sex deals. On a brighter note, should you ever find yourself in need of exchanging drugs for sex, including with a semi-friendly colony of trannies, Newark’s train station has your back, so to speak.

As for NYC’s Penn Station, and points farther north, that’ll have to wait for a future posting. I hope you’ve found what’s here useful and, as always, please feel free to post a comment below.

3 replies on “Amtrak’s Northeast Regional train – slow and utilitarian, but beats the hell out of I-95”

I think you were a little hard on Amtrak and Newark. Frankly you missed the part about it being 1000x better than flying. No security lines, just show up 10 minutes before and hop on the train. The seats are spacious and the coffee at the cafe is fantastic. And aside from the drugs and trannies, the Newark station is actually quite historically beautiful in an art deco style. Otherwise, the article is quite in insightful and on the mark.

My wife and I (from Australia) will be using the NER train from DC to NY on a Friday morning in June leaving 9.20am and we want to use the quiet car.

The comment from Marisa above says one can arrive 10 mins before departure whereas your comments suggest that there are long lines. What time before the departure time of 9.20am should we arrive at the station to give us a good chance at the quiet car please?

Please bear in mind that we are both 60yo and will have 2 pieces of luggage each.

Thanks for reading the site and leaving a comment. I hope you enjoy your trip to the States.

If you’re flexible with your seats, then no worries – per Marisa, showing up in DC with a few minutes to spare, hopping onto the end of the line and grabbing an open seat shouldn’t be a problem.

If you’re aiming for the quiet car though, showing up 30 minutes or so early would be wise – the gray-suited bureaucrat crowd that boards in DC likes its quiet and searches out that car. Also, per the article, in DC everyone is kept waiting in the station rather than alongside the tracks. Once the gate opens and you pass through, it can be a semi-polite running of the bulls as people race down the platform to a seat (often, in the quiet car). Especially if you’re slowed by luggage, allowing yourself that extra time will help ensure you get the seats you’re after.

Thanks again for reading the site. Please let me know if you have any other questions.