In less time than it takes DC to repair an escalator, North Korea added a giant new statue of Kim Jong-il to a hill overlooking Pyongyang. Shown here (image courtesy the Washington Post), is the new statue of Kim, apparently built since his death in December, standing next to the statue of his father that has long overlooked the Pyongyang skyline. 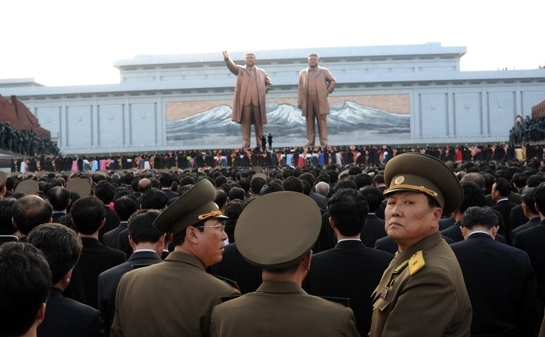 I’ve been to the monument and stood at the foot of the older Kim Il-sung statue and can attest that pictures do them no justice. 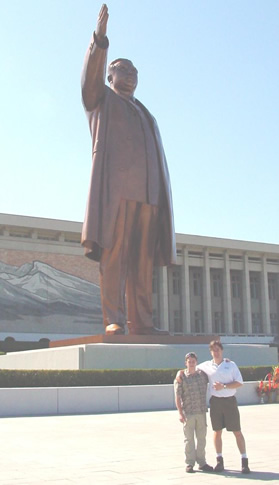 They are gigantic, looming over the horizon, with even the tallest person barely coming to the bottom of Kim’s feet, as shown in the photo here. Even in the Post photo above, people on the raised dais that serve as the statues’ platforms barely come to the bottom of the men’s knees. It is important to note that the elder Kim is shown as being taller than his son, as was true in real life. I wonder where Jong-eun’s statue will go?

Please visit 1stopKorea for more on my visit to the Monuments of Kimland. For more on the celebrations in North Korea honoring regime founder Kim Il-sung, please see the article in today’s Post that carried the photo used above. Though, the photo is much larger and clearer in the actual paper.

Below is a picture of the Pyongyang skyline taken with the statues at my back. The photo illustrates how close the memorial is to the city center, while still rising above it.

As always, thanks for your time. Please leave any comments below.