Amtrak’s Chicago to New Orleans train is unique. For those used to thinking of trains coldly, as just another form of dilapidated mass transit, The City of New Orleans is a throwback to a different era: a time when travel could still embody glamour and style. The outfittings and appointments are newer, the dining car cleaner, and the level of service higher. None of the airline envy you see on so many trains [yes, I’m talking about you, Northeast Corridor], with their jammed seating, lousy vending machine ‘food’ and decrepit facilities; The City of New Orleans rescues travel from the airlines’ nine circles of hell and returns it to something … dare I say … enjoyable. 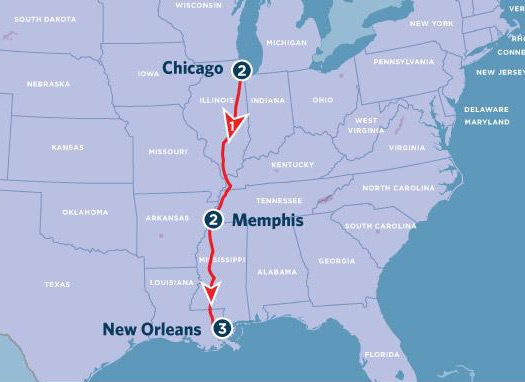 
It was a Chicago-cold early February afternoon, and I was sitting and daydreaming in Amtrak’s first class lounge (“first class” apparently meaning mini-muffins and coffee refills). The Super Bowl was playing on the lounge TVs, and train boarding came and went according to the ebb and flow of the game – people moved only during commercials and at halftime.

I sat and watched the crowds, typing emails and getting ready for my 20-hour ride on Amtrak’s legendary run. Awaiting my arrival down south was Mardi Gras, warmth, and an old friend and native of New Orleans, Todd. We had met over a decade before in Korea, me having gone to teach, him to study taekwondo. He’d left Seoul a few years before, to head home and start a martial arts school in his hometown. After Katrina, he’d gotten the school back up and running within a couple of months. He promised a guided tour, a good party, and plenty of great food.

Boarding came after a long, frigid walk down Chicago’s wind-whipped platform. Gail, the conductor for our car, met everyone with a hearty, “Welcome aboard!” then directed us to our private berths. The car was divided into several rooms, one or two big enough for a family; the others designed for couples or those traveling alone. 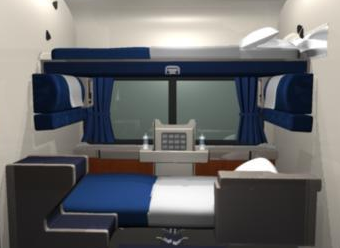 My berth came with a huge window, cozy bed, comfortable recliner, and even my own climate control. After making sure everything was satisfactory, Gail took my reservation for dinner before proceeding to the next compartment. Behind her, the door slid shut with a healthy click and I was suddenly alone. With the sounds of others boarding around me, I sat back and watched as another train pulled up and disembarked its passengers, each person wincing as they stepped off into a slap of cold.

Within a few minutes, the head conductor’s voice crackled over the loudspeaker, welcoming everyone aboard and going over a few rules of the road, plus the all-important dining car schedule. He concluded by telling everyone to remember to wear their shoes when moving about the train.

Hmm, I guess we really were heading into the South.

A little while later, Gail came back to show me to the dining car. With no lock on the door to my compartment, I was worried about leaving my things behind and quietly mentioned it to her.

“I’ve never lost a laptop yet, and I don’t intend to tonight. I’ll keep an eye on your room, sugar.”

Comforted, and trying to figure out when I’d last been called “sugar,” I walked down the corridor to dinner.

Outside, the weather had become a full blizzard, with only vague glimpses of the small houses lining the tracks visible through the snow. I sat down in the vinyl-and-glass, Cross Country Cafe, and quickly flipped to the ‘Hometown Specials’ part of the menu. Shrimp Remoulade, Red Beans and Rice with Andouille Sausage, Chicken and Sausage Jambalaya … looking over the menu I forgot all about the cold outside and dove in, ordering one of everything. I may have been riding alone, but I was going to eat for two.

Around me everyone else was doing the same – no stale burgers, plastic trays, or lousy rest-stop food here, this was how dining on the road is supposed to be.

The train community, especially in the States, is a small one, and very friendly. Though I sat down alone, my table and the ones surrounding it were soon crowded with other diners. Dinner soon turned out like it always does on a long train ride; everyone joining in to compare the food and scenery with that of other trains in other places.

Listening intently was one of the people at my table, an Amtrak conductor onboard to relax and enjoy the line’s most famous route. He was young, new to the business, and keenly interested in everyone’s opinion. He earnestly tried to address our questions, while talking about his love of the job and hopes for Amtrak’s future.

I’ve traveled on a fair share of trains, Tehran-Istanbul, the Trans-Siberian, Saigon-Hanoi, and had always wished for a U.S. train that embodied either the adventure of the more exotic trains, or at least the sheer speed and efficiency of Japan and Korea. Listening to the young conductor, and seeing the excitement in his eyes as he spoke of his hopes for Amtrak, made me feel better about my chances. Sure, it’s got problems, but any company with employees that energized has something going for it.

After two hours of eating and talking through one of the best dinners I’d had in a long time, it was back to the room. Outside, now somewhere in southern Illinois, it was still snowing, farmland alternating with small towns tucked against the tracks. Drifting off to sleep, I could hear the sound of icy snow smacking the window.

Many hours later, with hazy memories of short, nighttime stops, I slowly rocked awake. Sunlight streamed in around the blinds. Reaching up, I slid them open for a look outside.

The first thing I saw? A decrepit collection of three houses, each with a car on blocks in the yard.

We’d made it to Mississippi.

Next up was something I’d been curious about ever since I’d made my reservation: the shower compartment. This was my first time on a train with an actual shower, meaning no more dealing with the steady ripening of myself and everyone else while trying to bathe in the sink, Amtrak promised real showers!

I wound my way down the car, slid open the door, and there it was: changing room, fresh towels, and a clean shower stall. I stripped down, figured out the controls, and flipped everything on. Though it took some acrobatics to fit under the showerhead (best for people not much over four-feet tall), the shower itself worked like a charm. I’d half expected cold water, mold, and nothing but drizzle, but, aside from the height, it was perfect.

After a blissfully long, hot shower, I settled back in my room for the last couple of hours. The train slowly found its way into and through the city, even circling the Superdome before reaching the station. I grabbed my bag, thanked Gail for all her help, and walked out into the warm Louisiana sunshine.

If you’re planning a trip to New Orleans, whether for the first time or the 50th, consider taking an extra day and arriving by train. The slow pace, hospitality, and fantastic food is the perfect segue from daily hassles to a relaxing break in The Big Easy.

Amtrak
This entry was posted on Sunday, May 22nd, 2011 at 8:11 pm and is filed under Random Travels, Travel by Train. You can follow any responses to this entry through the RSS 2.0 feed. You can leave a response, or trackback from your own site.