Driving by, Natanz is just another exit on the highway, with the city visible in the distance. The nuclear site is not something mentioned by the local road signs. Professor saw me scanning the area, but told me not to bother.

Just past Natanz to the northwest is an isolated little village nestled in the mountains called Abyaneh. We wanted to visit, but finding the right highway exit proved a problem – Professor was used to traveling with large tour groups on buses that included drivers. This was the first time in several years he’d driven himself, so he was occasionally unsure of which way to go when we got into off-the-beaten-path areas.

As I studied the map, I realized we’d zoomed past our exit and were rapidly approaching Kashan, the day’s final destination. For a moment we debated just giving up and heading on, especially given all the snow we could see in the mountains that might close the roads.

The debate was short-lived however, and we were soon looking for an exit to use to turn around. Of course, we found none in the vast stretch of emptiness. That is, until we popped over a little rise and went flying past it.

Professor quickly slowed and pulled over to take a look. We could turn around, but we’d have to back up along the shoulder.

Just then, not 30 seconds after we’d come to a stop, came the sound of a motorcycle pulling up next to us, then a sudden tapping on Professor’s window. Two soldiers, an AK-47 swung over the shoulder of the passenger, had appeared out of nowhere. We were still within 15-20 miles of the nuke facilities and security was trigger-finger tight.

Professor, somewhat startled (he hadn’t even heard the bike pull up), slowly rolled down his window. He spoke very calmly, pointed to the map and immediately started asking for directions – would it be ok for us to turn off the road here to head back to the Abyaneh exit? This distracted the soldiers from their own questions, and had the added benefit of confirming our directions and getting us permission to reverse course. With a warning to never stop in this area again the soldiers sped off, though the passenger kept looking over his shoulder to make sure we actually did what we said we would. Impressive security – quick to react, but not heavy-handed.

Once headed in the right direction, it wasn’t long before we found our exit and were soon driving down a narrow, twisting road into the snow-covered mountains. Here, near the nuclear facilities, there were even more military bases and watchtowers than along the Iraqi border. We even drove past a couple of antiquated-looking anti-aircraft installations. Any U.S. or Israeli air strike on the nuke facilities would fly over this spot, and those facilities were there to try and stop it.

Once into the mountains, the military bases faded away and the scenery went from bland to stunning. One minute we were driving through brown nothingness, the next minute through trees, snow and mountain streams. It felt like driving into a postcard.

We climbed slowly into the mountains. Professor was especially careful as we rounded the turns, having come upon the occasional village local caught unawares by a car actually using the road. I stared out the window. After the brown desert the glaring colors of the white snow, deep red clay, and shining green pines were almost painful. The decision to turn around and find Abyaneh was looking to be a good one, easily worth almost getting arrested by the suspicious soldiers.

After a little over an hour, we finally pulled into Abyaneh. The soil and clay in the nearby mountains gave the town a unique reddish hue, one that contrasted with the white snow and remaining green of the trees, much like a Christmas picture.

The first stop was lunch at a hotel on the outskirts of town. The large building was so utterly and completely desolate it took us a while just to find an unlocked door to get inside. The sudden arrival of customers in the dead of winter apparently caught two of the owners, a man and his mother, so off guard they were still asleep. Though it was well after noon, they both stumbled into the restaurant like they’d just woken up. Obviously excited to have company, they were soon all smiles and super friendly, quickly whipping up whatever we wanted from the huge menu.

While the mom cooked, the son came over to talk. The family had come out from Tehran a few years earlier to start the hotel and the slow-paced mountain life seemed to be driving him a little stir crazy. Well-educated, he spoke enough English so Professor didn’t even have to interpret. He was especially excited to hear I was American, immediately launching into quotes from half a dozen Hollywood movies. His favorite, oddly, was the Mel Gibson movie The Patriot, from which he could quote at length and had apparently used to keep his English in shape. He wanted to know all about guns in U.S. culture, and of course what Americans thought of Iranians. When I asked about his own government, I couldn’t believe some of the things he said … for his sake left out of this account. Suffice it to say though, there’s a welcoming place for English-speakers in Abyaneh.

After lunch we took pictures with him and his mom, then he took us on a guided tour of the hotel, proudly pointing out the winter renovations they were doing to get ready for the next summer’s tourists.

Getting in the car to leave, I heard a sudden shout from behind. Turning, I saw a group of construction workers across the street all yelling and waving friendly hellos. After these two warm welcomes, Professor and I drove a few hundred yards into the town proper. We parked the car, then started down the narrow pathway that led into the heart of the 1000-year-old village.

The old pathway, at best, was barely wide enough for two people. But now, partially buried under snow and ice, it was certainly not at its best. The first people we came upon were a group of pre-school kids all bundled up and having a snowball fight, or more precisely, a ‘see how much snow you can kick onto another person’ fight. Professor and I joined in for a bit, until the kids started to win, then headed further into town.


The narrow pathway winding between red brick homes covered in clean white snow, plus the friendly people, quickly made this little town one of the best stops of the trip. After passing the kids, we next came upon an old woman who urged us to visit her home for some dried apples. She wouldn’t take no for an answer, even berating Professor for trying to refuse a request from an old woman. He quickly apologized and we headed down a tiny offshoot path to her little courtyard. She offered us dried apples and warm tea, a mixture absolutely perfect in the crisp mountain air.

Apparently, the tourist trade had already cut a wide swath through the town – after feeding us she broke out an old handmade necklace and urged me to buy it. She was such a nice old lady, and the silver necklace with a snuff holder as the main piece looked so unique, that I went ahead and bought it. It cost all of four bucks. 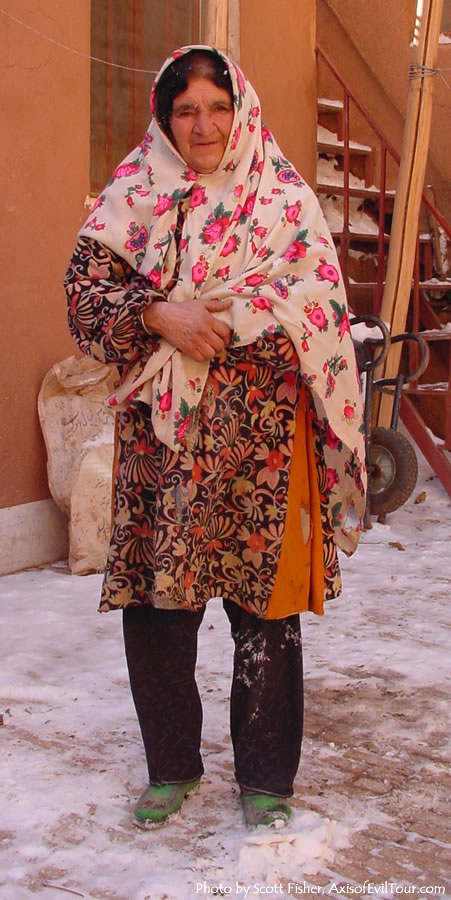 As we got up to leave, I asked to take a picture with her, but she refused, saying without her husband’s permission it wouldn’t be right to take a picture with a man. But a picture of her standing alone in her courtyard, laundry flapping in the cold wind, was fine so we did that instead. Then she gave us the whole bag of dried apples, again refusing to take no for an answer and getting a little piqued at Professor for trying to refuse. It was actually funny watching his demeanor go so quickly from in-charge tour guide to scolded schoolboy.

We walked back up to the main path and continued exploring further into the village. Within a couple of minutes we met another old woman, who again hurried us inside her house, seemingly somewhat irritated that the other old lady had seen us first. It turned out this woman’s specialty was sewing and quilting. I ended up buying a couple of fancy handmade scarves to give as gifts, again for only a few bucks. 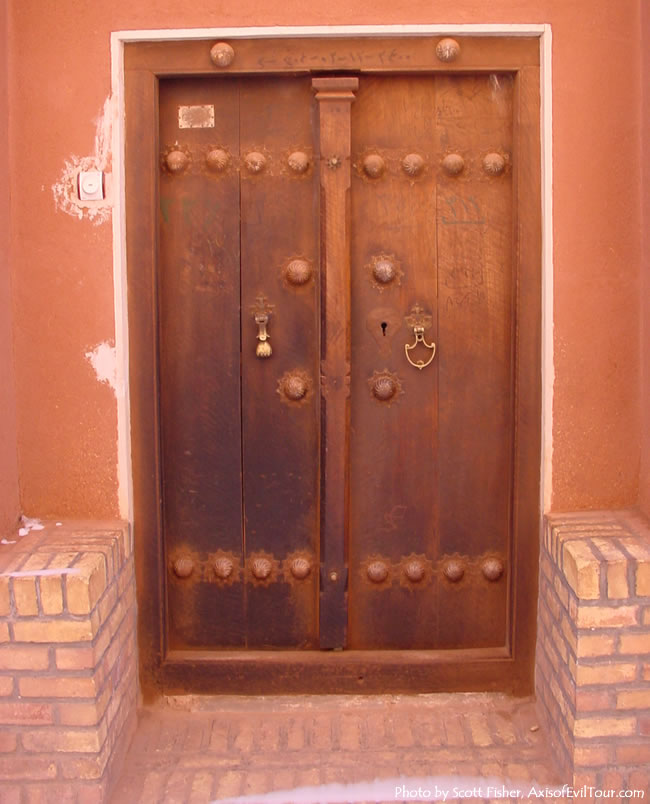 A common sight on traditional buildings throughout the country were separate door knockers for men and women. Using the one for your gender (guess which knocker belongs to which sex) helped identify who was at the door so it could be answered by the appropriate sex – helping to prevent the ‘immoral’ mixing of unrelated men and women.

After exploring a bit further, we finally turned back to the car to make sure we started in time to get off the twisting, ice-covered mountain road before sunset. On the way back, we ran into the two old women talking to each other, no doubt discussing the two of us. As we passed, they wished us a safe journey, then it was past the kids and into the car.

After the beautiful ride back out of the mountains, the return of the brown desert and industrial-looking military bases was depressing, like returning to a cold home after a long, blissful holiday.

After that it was another two hours of driving to Kashan. Neither a large nor heavily touristed city, our hotel showed it. Marco Polo himself could have stayed in my room – the mattress, which felt like sleeping at the bottom of a giant ‘U’, would certainly have been the same. The room was freezing and when I checked the heating system I found out why – the unit was still set on air-condition. Given it was January, I was obviously the first person to stay in the room for months. And this was in the nice part of the hotel – the other wing looked about to collapse.