After a brief hiatus, finally back at work and finishing up my first book using Apple’s new iBooks Author digital publishing platform. As this project winds down, a few new issues (for more writings on iBooks Author, head to the Digital Publishing section of the blog) have become evident.

First, as shown in the screenshots below, the audio controls differ markedly when switching between the portrait and landscape orientations. I prefer the portrait view’s smaller controller size and would love to be able to use that controller in both views. Unfortunately, if it can be done, I’ve yet to figure out how.

Second, if you look closely at the two screenshots, you’ll notice the portrait view has the recording I made for “during midnight” (a common Korean-English expression discussed in this book on Konglish). Unfortunately, the recording disappears when the book is switched to landscape view, a problem that happens at least one other time in the book. Despite deleting and reloading, plus numerous other attempted workarounds, I’m unable to fix the problem. This leaves a reader using only landscape view deprived of the book’s full content. I’m not sure why this happens, but it shouldn’t. 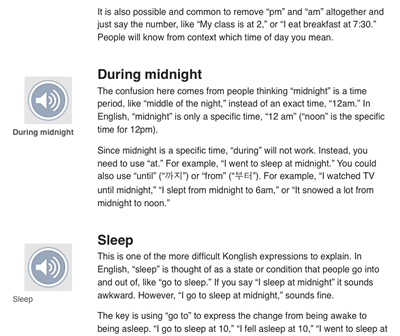 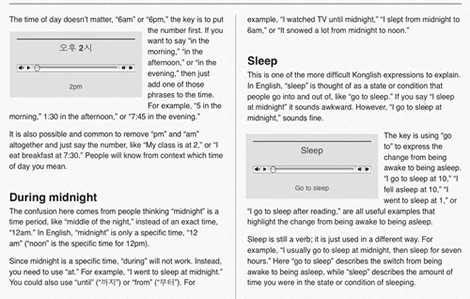 Other problems with the audio include a limited ability to adjust text size and positioning in the titles of the audio files. This is especially noticeable in portrait view, leaving me frustrated and my readers with a less visually appealing product.

Finally, as an educational book, I originally planned to include quizzes at the end of each chapter, a feature theoretically possible through the use of widgets included with the program. After experimenting with several different layouts and question styles, however, I found the layout so unwieldy, and the functionality so buggy, that I abandoned the idea and stripped out all of the quiz interactions.

Overall, I found Author friendly and easy to use, as long as I didn’t attempt anything too complicated. Adding audio, quizzes, and other advanced features however, quickly produced problems – some so severe I cut some of my goals for the project. Other users, with more luck, patience, or skill than I, may find a way around these problems. If so, please post your comments below. If not, a future update to the software will hopefully solve these issues, while also increasing functionality and offering a greater number of publishing options.